Introduction
Cardiovascular disease, type II diabetes, and other obesity related health complications are among the top killers of American adults today. As these illnesses have grown increasingly more prevalent over the years they have taken the lead as the greatest contributors to rising health care costs. The aim of this paper is to identify how these diseases develop and address ways for preventing the onset of  chronic illness in order to improve health and longevity as a means of potentially curbing the rising cost of U.S. health care. Citing strong evidence, I posit that the single-most significant factor for improving national health is the proper maternal nutrition during the critical intrauterine, neonatal, and postnatal periods of child development. Additionally, I hypothesize that while maternal education programs may result in positive changes to a mother’s diet during her pregnancy period, it is the cost, availability and ease of access to quality nutritional foods which are tied to a country’s cultural lifestyles, and individuals’ socioeconomic class that primarily influences the success of this education policy.

This essay will begin by describing the current state of the US Health Care system, discuss problems with rising costs, and identify the primary factors responsible for these costs. Next I propose an alternative paradigm for reducing costs that turns away from increasing effectiveness of current treatments and towards a new paradigm of preventative medicine. I will then introduce the Barker Hypothesis, which will serve as the foundation for further arguments that explains the causes of high health care costs. Furthermore, I will discuss the issue of whether implementing the policies under a preventative medicine paradigm, justified by the Barker Hypothesis, will reduce total health care costs. I will conclude by highlighting the need for proactive health care measures for improving longevity and quality of life. Lastly, I provide evidence-based policy recommendations that will accomplish this aim through government projects, subsidies, and educational programming.

US Health Profile
Diabetes, cardiovascular disease, and other complications related to obesity have become among the leading killers of U.S. adults and make up a significant portion of total health care spending (See Appendix D).  Data from 2007 suggests that diabetes alone accounted for about 7% of the total $2.24 trillion national health expenditure (Sisko 2009). Furthermore, it’s estimated that by age sixty, about 20% of U.S. adults will have diabetes while 40% will have pre-diabetes (Dall 2009). Even more overwhelming than the diabetes epidemic, cardiovascular disease is the leading cause of death in the U.S. and currently accounts for 17% of total national health expenditure. It is predicted that by 2030, nearly 40% of Americans will experience some sort of complications due to cardiovascular disease (Heidenreich 2009). Appendix A shows the projected costs due to this development. It is for this reason that the proposed policy will address measures to help prevent such common, costly diseases.

Framing the Problem
The current health care treatment paradigm addresses disease symptoms as a means of ameliorating health problems. While this method is appropriate for the treatment of diseases, it is important to identify ways to help prevent these diseases from occurring in the first place. Rather than improving the efficiency or effectiveness of dealing with present health problems, we must change the focus towards identifying their causes in an effort to prevent the problem of chronic disease (Newnham 2007). I posit that preventative medicine will ensure increased quality of life and longevity, which should translate to a decrease in chronic illness and, as a consequence, reduce health care spending. Only in this way–through preventative measures–can we reduce the growing proportion of these chronic diseases (Rechel 2009). The causes of diseases are attributable to genetic factors as well as lifestyle influences. While genetics may predispose an individual to certain diseases, the onset of these diseases may be greatly impacted by stimuli during the individual’s development or by his/her lifestyle choices (Barker 2004).

The Barker Hypothesis
The Barker Hypothesis states that early fetal development in the womb establishes how vulnerable we are to environmental exposures and how well we cope with them throughout life.  In 1991, scientists coined the term “programming” to describe the “induction, deletion, or impaired development of a permanent somatic structure or the setting of a physiological system by early environmental stimuli during a critical period, resulting in long-term consequences of function” (Gluckman 2005). Through mechanisms of “developmental plasticity,” a single genotype can produce more than one alternative form of structure, physiological state, or behavior in response to environmental conditions (Barker 2004). Specifically, the Thrifty Phenotype Hypothesis introduced by Hales and Barker suggests that when fetal environment is poor, there is an adaptive response, which optimizes the growth of key body organs to the detriment of others and leads to an altered postnatal metabolism (Gluckman 2005). This altered metabolism functions to enhance postnatal survival under conditions of intermittent or poor nutrition. In summary, the Barker Hypothesis suggests that coronary heart disease, stroke, Type 2 diabetes, hypertension, cognitive functioning and other metabolic syndrome disorders may originate due to fetal adaptations resulting from malnutrition. These fetal adaptations can then cause permanent detrimental changes in the body’s structure and physiology (Almond 2011). A large amount of subsequent studies have added to the growing field spawned by Barker’s original insight, and have expanded and validated what is now known more broadly as the Developmental Origins Hypothesis. The study of developmental origins examines the relationship between intra-uterine, neonatal, and postnatal environmental factors and the long term health of an individual.

Maternal-Fetal Health and Developmental Origins
During the fetal gestation period the intrauterine environment is directly determined by the mother’s health. As a result, the mother’s environment, nutrition and lifestyle choices play a significant role in fetal development. A toxic-free, stress-free environment, adequate consumption of micro and macronutrients, and an active, healthy lifestyle are all important for sound health and well being. In fact, studies have concluded that different doses of different nutrients influence certain tissue health and growth in developing mammals (Langley 2004). Other recent studies by Barker and Godfrey suggest a significant link between developmental programming and future development of diseases such as hypertension, coronary heart disease, and type II diabetes (Godrey 2011).

Literature suggests that lower birth weight–a possible result of poor maternal nutrition–leads to, on average, higher systolic blood pressure and increased probability of hypertension later in life (Bagby 2007). Other studies have highlighted the importance of proper folate (vitamins) and iodine levels in pregnant women in ensuring optimal fetal neural tube and thyroid development respectively (Hetzel 2000). A more recent line of study has demonstrated that children born to obese or hyperglycemic mothers are at a higher risk of having metabolic syndrome disorders and breast cancer later in life (Gluckman 2008). Appendixes B and C illustrate various links between maternal diet/regulation and fetal development of metabolic syndromes.

However, it is not enough to provide maternal health education without also providing access and affordability to nutritious foods. An effective policy must include both. While education may increase people’s knowledge of healthy lifestyle, socioeconomic restraints my prevent access to healthy foods. Consequences of lower socioeconomic status are lower incomes, decreased access to nutritional foods, and more dangerous living environments. Indeed, studies have shown that access to higher quality foods and better nutrition are strongly linked with higher socioeconomic class (Darmon 2008). Therefore, we also propose subsidizing healthy foods with appropriate levels of protein, vitamins, and minerals that comprise a well balanced diet. Ensuring proper maternal health and care will ensure a child’s optimal development during the intrauterine, neonatal and postnatal periods of development.

Policy Impacts
According to Murphy and Topel, the prospective value of a 10% reduction of mortality of cardiovascular disease for middle age man is nearly $35,000 (See Appendix E) (Murphy 2006).  Assuming the suggested policy would reduce mortality from major diseases, we can thus conclude significant gains in social health capital will be realized. In addition to expected gains in health capital, another important consideration is whether a decrease in major chronic diseases would reduce total health care expenditures. While increased longevity may be accompanied by additional health care costs associated with aging, it is possible that decreasing the frequency of costly diseases could reduce overall national health expenditures. According to economists, including Bernd Rechel, whether increased longevity results in higher net health care costs depends on whether the reduction in costly diseases causes a “compression of morbidity” or an “expansion of morbidity”–that is, whether gains in longevity would be accompanied by shorter or longer periods of illness before death (Rechel 2009). Obviously, longer periods of illness before death would contribute to extra health care costs, while a compression of morbidity could result in a net decrease in health expenditures. More research is needed to determine whether the recommended policy’s expected decrease in major chronic diseases–attributed to improved maternal nutrition–would cause a compression in morbidity or not. Regardless of whether the policy would succeed in reducing total health care expenditures, I believe increased maternal education and subsidization of healthy foods to lower class pregnant women would decrease the rate of major chronic diseases and increase overall health and longevity in America.

Appendix A
U.S. Spending on Treatments of Cardiovascular Disease Over Time (Dall 2010) 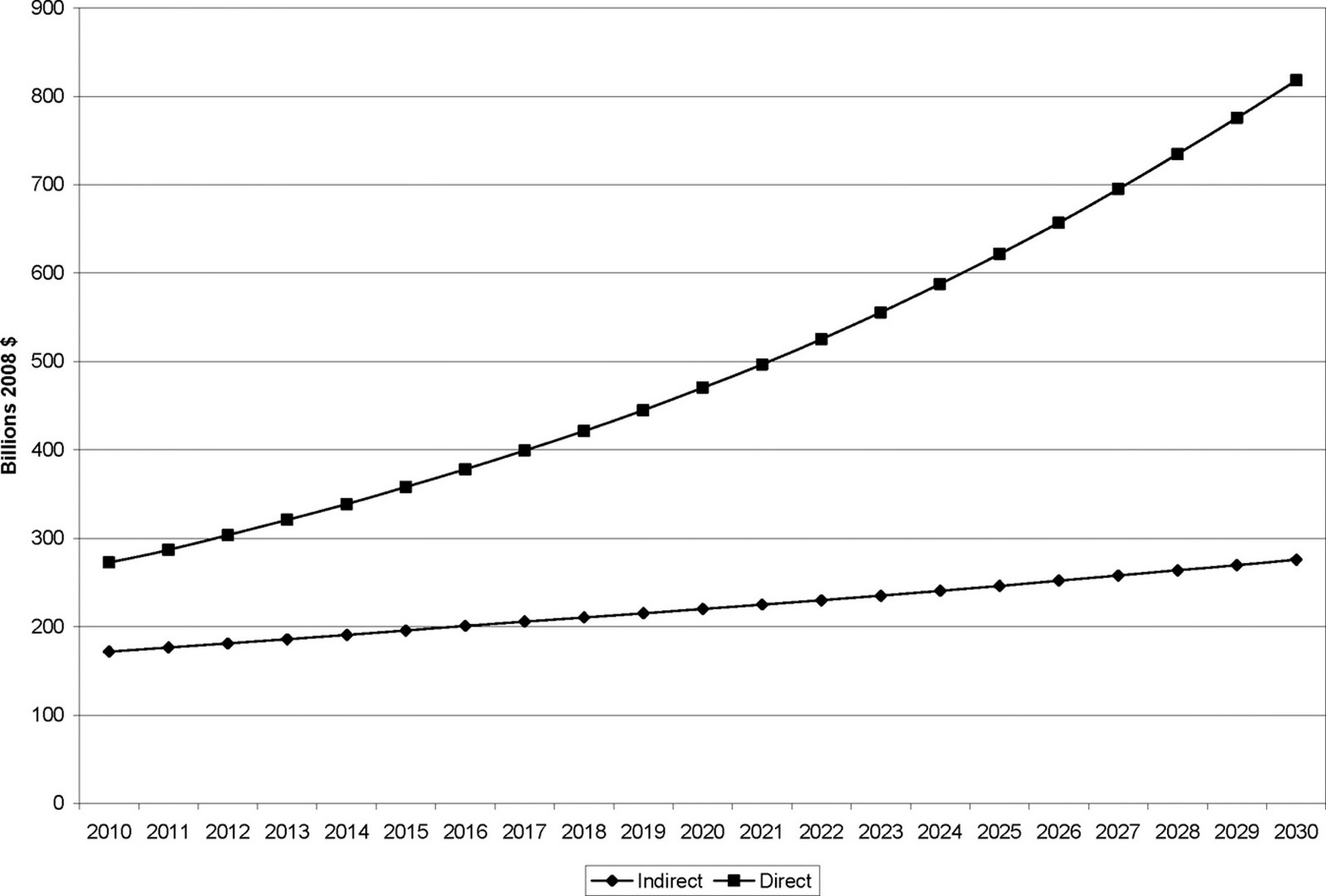 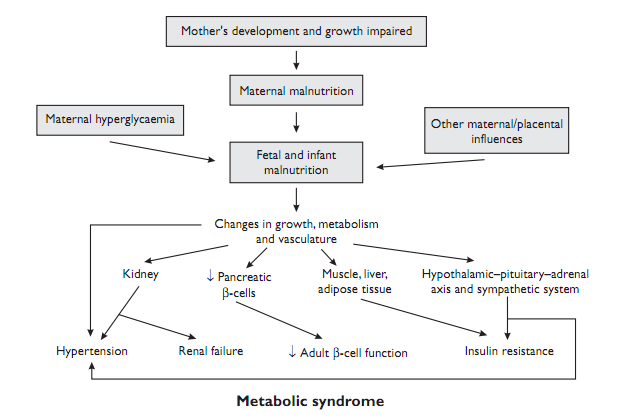 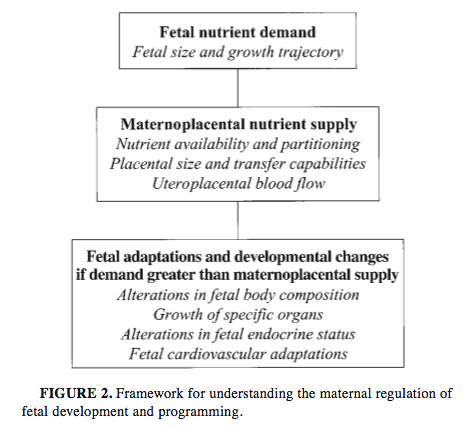 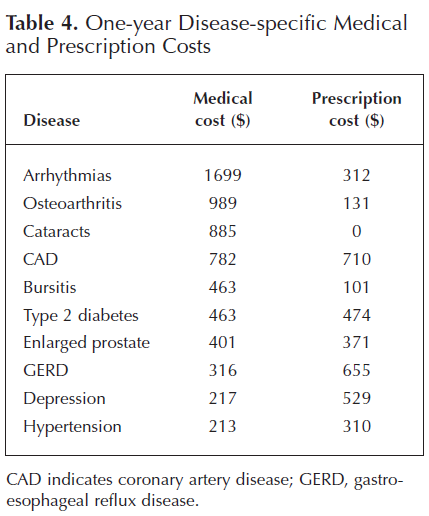 Prospective Value of a 10% Reduction from Selected Diseases, Males (Murphy and Topel, 2006) 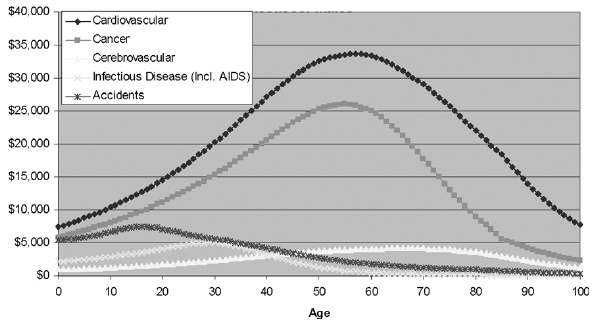 Prospective Value of a 10% Reduction from Selected Diseases, Females (Murphy and Topel, 2006) 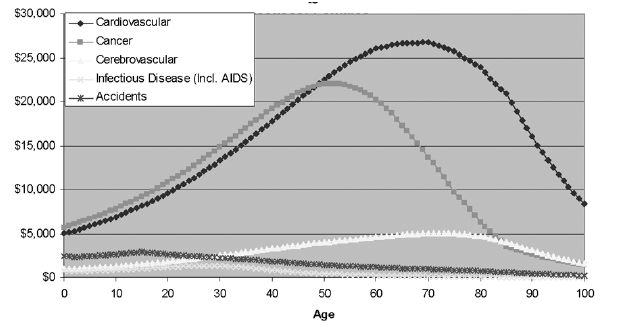