The primary aim of compulsory education is to ensure the proficient attainment of knowledge in a variety of predetermined areas. The benchmark standards for proficient knowledge and the areas of expected proficiency are established by the state and federal governments. Measuring student performance in this a way not only to assess a student’s knowledge proficiency, it provides educators and policy makers with a method for determining the efficacy of school policy and teaching strategies. Because there are many factors and contextual issues that influence a student’s performance, a challenge for educators and school administrators today is finding ways that accurately measure knowledge proficiency in an effort to develop policies to improve student performance.

The current method for measuring student performance is through standardized tests that cover a handful of core subjects that are deemed as accurate indicators of a students knowledge. Standardized testing was introduced as a means of providing a statistical distribution of student performance. This method allows scores to be quantified against the relative aggregate population of test takers in the areas of critical reading, math, and science. These tests can only measure a limited number of outcomes, the scores of which are simply ordinal numbers that measure the relative position of any given student – the innumerable number of factors at play cannot all be taken into account by a series of general tests. While it is useful for determining abstract averages of student performance based on ordinal analysis, it fails to determine the factors which contribute to improving achievement. As a result, its ability to determine the performance of specific schools and their districts and provides little insight into the specific factors responsible for the successful policies. 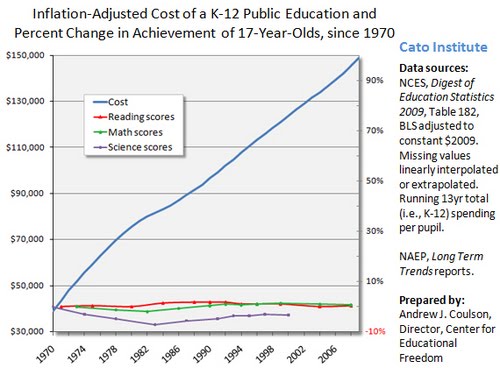 Instead, research has shown that standardized tests work to the detriment of student learning as teachers are incentivize to focus on test preparation. Rather than encouraging conceptual comprehension of the material, students are instead forced to memorize irrelevant facts and improve test taking efficiency. Furthermore, this reorientation of focus shifts classroom goals that cater to improving average scores which increases teacher attention on the average students and leaves struggling and gifted students at the far ends of the spectrum without adequate attention or support. In addition, test scores have direct repercussions on a students future, faculty tenure, and school federal grant money. The consequences of such a premium on high test scores increase the likelihood of competitive behavior between students. This detracts from the overall quality of their education and encourages unethical behaviors from students and teacher and administration. In recent decades there has been a growing problem with the proliferation of student cheating and news of countless scandals involving teachers and schools manipulating test scores for personal gain.

Recalling that standardized testing is an ordinal measurement, there is only so much value that can be derived from the interpretation of aggregate scores as an interpretation of knowledge proficiency. The varying content and difficult of any given test can only provide a crude indicator of performance that is relative to other test takers and dependent on innumerable variables which cannot be captured in a single test.

In light of this evidence there is good reason to initiate a shift away from standardized testing towards better indicators of student achievement. Research indicates that societal factors, emotional factors, the learning environment, and methods of teaching are better predictors of educational success. Additionally, there is strong evidence suggesting that high quality schools are represented by high quality faculty and administration.

The various stakeholders within education reflects the complexity of the issue. Standardized testing reinforces extrinsic motivations within society that diminish self-efficacy and reinforce values that emphasize instant gratification without long term investment. The consequences of this testing reverberate through the students and extend throughout society, affecting every facet of our culture. Solving the issue will require addressing factors relating to the classroom environment by supplying highly qualified and incentivized teachers who engage in meaningful relationships with their students, praise individual experience and inquiry over abstracted ideals, and encourage work ethic over results.

What’s so bad about standardized testing? (n.d.). Retrieved from https://www.msu.edu/~youngka7/cons.html